Partially due to an out of date electoral system, in the Irish republic we have a situation where Independents frequently hold the balance of power.
Quite often, independents like the late Tony Gregory are honourable people, with no blemish on their record and who really want to make things better for their constituency.
But other independents are frequently those who have lost a party whip, and as we saw in the case of Beverly Flynn, get back to base eventually.
Our constituency based system means local clientism is what is important, far more important than national issues. One current TD worth mentioning, who supports the current Government is Michael Lowry from Tipperary North. 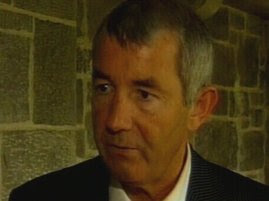 Lowry had started his working life as an apprentice at Thurles based Butler Refrigeration in 1971.
He worked his way up to sales manager, a position that bought him into contact with Ben Dunne, as Butler Refrigeration installed and maintained refrigeration systems for one of Ireland's largest retailers, Dunnes Stores.
DUNNES DEVICES
Ben Dunne, a well known Irish business man saw his family business increase turnover from IR£300M to IR£850M between 1983 and 1993.
He devised a method of gaining influence and control over companies that supplied goods and services to the supermarket chain, a system that created a series of companies which were, in effect, subsidiaries of Dunnes.

One such company was run by a Minister in the Fine Gael led government at the time, Michael Lowry, first elected to the Dail in 1987.
His contact with Ben Dunne and the financial donations he secured for Fine Gael played a critical role in his rapid rise in the parliamentary party, so much so that he was from 1994 to 1996 Minister for Transport, Energy and Communications.
Lowry left his job at Butler Refrigeration soon after his election, and in addition to his work as a TD he also started up a consultancy work for Dunne's.
He then set up a company, Garuda Ltd, that traded under a different name - Streamline Enterprises - and started to conduct work for Dunnes, after Ben Dunne had told the TD he was no longer going to use Butler Refrigeration, and offered Lowry the work.

The second part of the arrangement - and the most lucrative - was that Dunne would give Lowry a personal bonus.
This payment was essentially based on how pleased Dunne was with the services Lowry provided.
Lowry told the McCracken tribunal that Dunne had told him "The bottom line is, if you are good for Dunnes Stores....I will certainly make it worth your while and your company will be successful and you will be a wealthy man" 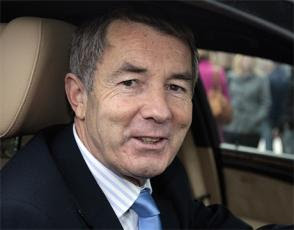 In addition to his TD salary, provided by the tax payer, he received a number of large payments from Dunne amounting to hundreds of thousands of pounds.
These payments were given to him in such a way that allowed tax evasion, much of the money was lodged in offshore accounts.

The McCracken tribunal ruled that by accepting payments and evading tax in the way that he did, Lowry made himself vulnerable to all kinds of pressures from Dunnes Stores had they chosen to apply them.

Regardless of Mr. Dunnes actual intentions, the threat of disclosure about the offshore accounts or indeed the threat to cut off a lucrative source of income could have been used to apply pressure on a senior government politician to obtain favours.

At the McCracken Tribunal it was also revealed that Dunne had paid IR£395,000 for an extension to Lowry's home. This allegation prompted Lowry's resignation from the Cabinet in November 1996.
He also resigned from FG to run as an independent.

It is an appalling situation that a Minister benefited from the black economy starting shortly after his election - if such a person can behave in such a way without serious sanctions, it is very difficult to condemn others who similarly flout the law. 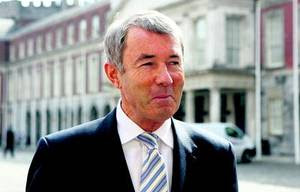 The circumstances surrounding the awarding of the second GSM mobile phone licence to the Esat Digifone consortium in 1996 (the biggest contract ever awarded by the State to a private company) by the FG led government has been the focus of the work of the tribunal since 2007.

The tribunal is still investigating whether money changed hands prior to the awarding of the licence to Esat Digifone by then Minister for Transport, Energy and Communications Michael Lowry TD.

Denis O'Brien of Esat Digiphone has claimed preliminary findings by the tribunal effectively state that the Esat consortium was “illegally” issued with the state’s second mobile-phone licence because he had a “corrupt” relationship with Michael Lowry.

To date, Michael Lowry has not been charged with any offence like tax evasion.

Due to the questions about the phone licence, a number of failed bidders are suing the state over the handling of the competition process.

Payback has been limited. In early 2007, Lowry announced that he had made a full and final settlement of all outstanding payments with the Revenue Commissioners. His company Garuda had to pay €1.2 million after a Revenue audit. He also paid almost €200,000 to settle his personal taxes

TRUE BLUE
However, it is clear that the ties to FG still remain. In 2009 1,400 people gathered to celebrate the political career of Michael Lowry. Prominent among them were two important public figures associated with FG. Ivan Yates, a former Fine Gael minister for agriculture and a successful businessman and Seán Kelly, a highly distinguished former president of the GAA, then a Fine Gael candidate and now FG MEP for Ireland South.

The Tipperary politician is a self-pitying cheat and a liar – yet still his career is deemed worth celebrating.
At the 1997, 2002 and 2007 general elections, Lowry topped the poll in his constituency.

Clearly, as Dunnes would say, better value politicians beat them all.
And Clearly, we have learned nothing.

Posted by irishkitchengarden at 3:48 PM