Blair, Bibles and Bullets - Bollox to that 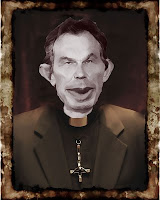 In probably the worst kept secret in the EU, Tony Blair is being promoted for President of the European Union. Today’s UK independent has an article on it
There is, of course, no official list of contenders for a new Euro-job which will only exist if the Lisbon treaty is fully approved and ratified by all EU countries, including Ireland in October 09.
But Mrs. Kinnock, visiting the European Parliament in Strasbourg, made clear the UK Government would be pushing him as the man to run Europe for up to five years under new treaty arrangements.
He has also received Gordon Browns endorsement as President.
What galls me is the arrogance of these people, assuming the position will exist.
Until the Irish will do what their told to, and vote yes, this is carts before horses.
This unelected post is still a new factor - and sorry, being selected is not being elected, I don’t vote for county councilors to pick my TDs.
Mr. Blair has been endorsed by Gordon Brown, and was previously supported by Sarkozy. He is also very close to Berliosconi. I for one do not like the idea of Mr. Blair acting in any capacity, titular or executive, as head of the EU.
This is a man who led his country to war on a lie, causing tens of thousands of deaths.
A man delayed a ceasefire causing slaughter of the civilian population of the Gaza strip .
A man who left the UKs labour party mired in sleaze, not least the halting of a corruption inquiry into the sale of fighter jets to a totalitarian regime.
I believe that faith is a personal issue, but I get very nervous when leaders make life and death decisions based on their personal consultations with God.
Apparently Blair believed strongly at the time, that intervention in Kosovo, Sierra Leone – Iraq too – were all part of the Christian battle
On departure from No. 10 Downing Street, Tony became a Catholic in 2007.
He then decided - as always- the system was wrong and he had been sent to right it, and argued that it is time for a church he has just joined to "rethink" its views.
His new found religious fervour is expanding, he has set up the Tony Blair Faith Foundation!
Just about every public utterance he makes is now about “faith”.
The London Evening Standard reported that: “When Blair met Barack Obama at the annual National Prayer Breakfast in Washington, where the former PM was a principal speaker, Tony insisted that the President should kneel and pray with him before they talked.”
In the speech, Blair made 31 references to God.
In my opinion we are looking at a messianic complex.
With regards to the still to be confirmed EU Presidency, one EU official said: "The difficulty is that no one has come up with a proper job description. People say the exact nature of the job will be shaped by whoever is appointed." [note - not 'elected' - so much for democracy]
Bear in mind a comment from another MP in the UK - William Hague (Con) the shadow Foreign Secretary, said the former prime minister should be let "nowhere near the job".
He said: "The creation of a new EU President could be enormously damaging for Europe.
Any holder is likely to try to centralise power for themselves in Brussels and dominate national foreign policies. In the hands of an operator as ambitious as Tony Blair, that is a near certainty."
In earlier postings I have written about this, the danger of centralisation of power, with which we have seen Blair at his worst, surrounding himself with yes men and women.
Those who disagreed with him were driven out, particularly Jack Straw on the insistence of the Bush Administration.
To me the most cynical move was dealing with a threat to his position and removing Mo Mowlam as Northern Ireland secretary at a very delicate time in the Peace Process, as her popularity and more traditional Labour values made her a potential rival.
He moved her to a move to the relatively lowly position of Cabinet Office Minister. Mowlam had previously denounced the post as "Minister for the Today program", and resented being appointed to it.
She was replaced by a man who epitomises corruption in Europe and the UK.
Lord Madelson has resigned twice over corruption and abuse of power - but his slavish dedication to Blair has ensured survival and success, a credit to the clientism of Mr. Blair
Blair has systematically dismantled Britain’s civil rights as shown in the must see, excellent documentary on youtube- Taking Liberties
Also, in this vein it is also worth watching Naomi Klein's documentary "End of America"
My greatest fear is that this type of draconian legislation, justified by the threat of terrorism, will be introduced on a pan european basis.
Dont say it cant happen - because it has already and could happen again.
If there is one reason to vote No - its No to Blair, and only the Irish have the God given right and not Blair driven fight to do this

Posted by irishkitchengarden at 9:37 AM