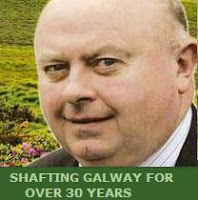 Court
It is no wonder Ireland is rapidly going down the tubes. We have a situation where the Law is not enforced in relation to standards in public service.
In the recent local elections, East County Galway Loughrea electoral area, Michael 'Stroke' Fahy of Ardrahan was re-elected.
In Ireland the nickname “stroke” is for someone good at “pulling strokes” - that is getting things done in a sly way for family, friends and supporters.
Now Mr Fahy has pulled a big Stroke for himself - In 2004 he resigned from FF when it emerged that he was at the centre of a Garda investigation. He continued to serve as an independent councillor.
After due process and a Jury trial in 2007 the Stroke was finally jailed in respect of the erection of more than a mile of fencing on his land. He was sentenced to 12 months in prison and fined €75,000.
A Jury at Galway Circuit Criminal Court found him unanimously guilty on seven charges brought under the Larceny and Theft and Fraud Offences Acts arising from the erection of boundary fencing on his land under a local authority improvement scheme
At his conviction, the Judge - Mr Groarke - told him that the most aggravating factor was the serious breach of trust by an elected public representative, who had defrauded the very body to which he had been elected to a position of trust.
Passing sentence, Judge Groarke said that while the offences were serious enough in themselves, Fahy had attempted to implicate an innocent man and had shown little concern or remorse.
He had displayed "bombast, bluster and bluff" in the witness box while he gambled with the reputations of honest men.
Support
In an attempt to remove him a motion was entered.
A councillor may be deemed to have resigned his seat if absent from meetings of the authority for a continuous period of six months, and he had spent 7 months in prison - but there is provision within the Local Government Act for the local authority to take into account a councillor's illness or failure to attend "in good faith for another reason".
Jail is hardly a measure of good faith
On September 11 2007 he got another unanimous verdict.
This time the backing of his council colleagues for his bid to hold onto his seat - the defeat of a motion apparently aimed at heading to have him removed from his seat for failing to attend council meetings - a bit tricky when in prison
Around 19 of the councillors of the 30 who were in power of the time have been re-elected
What is wrong with them?
Why are they willing to support a convicted thief who tried to damage honest council staff ?
On Pay???

It actually gets worse.

What makes this whole case galling is that after finally being incarcerated - due to the support of the other elected councillors - the council had to continue to pay Stroke even though he was in jail for defrauding the council
- and could not attend meetings - i.e - do the job for which he was being paid!!!!!!!!!!!!!!!!!!!!

This was apparently because of the appeal process.

Stroke confirmed he received the payments when contacted by the Irish Independent.
Thats our money - being paid to a convict who is in jail when he was meant to be working for us!

Stroke said he would have lost his council seat if the payments had stopped.

Fahy refused to say whether he was able to provide a service to his constituents while he was in prison. "I've no comment on that," he said.

Stroke said the conference expenses, which totaled almost €3,700, were claimed for conferences he attended prior to his incarceration.

He said absolutely no expenses were claimed by him during his time in jail - one would hope so.

Of course, on his release – and at liberty on appeal he has fought and won another election, and one assumes he was paid by the council through 2008 and 2009.

Re-election
Now, we actually have laws against criminals running for office.
Certain people are disqualified from becoming members of a local authority:

Also excluded are members of the European Commission, Parliament or Courts, A Minister of the Government, the Chairman of the Dáil and the Chairman of the Seanad.
Judges, The Comptroller and Auditor General, Members of an Garda Siochana (Irish police force) or a full-time member of the Irish defence forces.

Civil servants such as teachers, health board officials etc. are also excluded!!!

It seems to me if I dont pay a parking fine - I cant run, but even after defrauding tens of thousands, and being convicted he can ?

The reason he could run again it appears is even though he had served eight months when the Court of Criminal Appeal struck down the conviction and ordered a retrial.

Two months after his release he has had his case listed for retrial in Galway Circuit Criminal Court. Although the case has been referred to the Galway courts by the Director of Public Prosecutions (DPP), there is speculation that it will be sent to the Dublin Circuit Criminal Court on the grounds that it would be difficult to convene a jury in Galway that would be unaware of the original trial.

Friends say that news of the retrial has come as an enormous shock to him. I find that hard to believe.

How much more will this man cost?

Regardless of court costs incurred by the tax payer so far, don’t forget that the Stroke is perhaps the longest serving member of Galway CoCo, he has been in the Council since 1979.
That’s 30 years.Each outgoing councilor is entitled to something in the region of EUR 3500 per year served, so to be conservative – lets say 3000 per annum severance, that’s 90K if not more.

But the other 12679 of you who did not, and could have stopped a convicted corrupt politician being re-elected, I have one thing to say -

Ardrahan - You Arseholes, What have you done?

Posted by irishkitchengarden at 5:32 PM