POOR POLITICIANS
People who see certainties where others see nuances and shades of meaning are either prophets or a quacks, and our politicians are not prophets.
Our Minister of Finance cannot even accurately predict profits, or lack thereof, from the biggest gamble that Ireland has ever undertaken.
We have seen years of mismanagement and poor decision making of which NAMA is the most recent example, and with the Lisbon treaty we have chosen to say No, to dissent.
Dissent and disagreement with Government is the lifeblood of democracy, it is also essential because every once and a while it is right, and the powers to whom we try to speak are wrong. 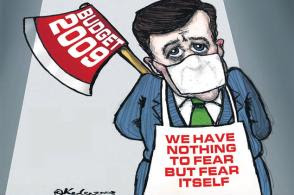 One very important lesson came from America, from a courageous commentator Edward R Murrow - but more about him later.
The elected, transitional, holders of power in our state, our employees, continue to impugn the intelligence and the loyalty of the people of the state of Ireland in relation to the European Union.
Some media pundits credit our politicos with a knowledge and understanding of the challenges facing Ireland and Europe which neither common sense nor their track record suggests they deserve.
If our politicians had proven their self declared knowledge, foresight and planning, about finance, the economy, health services etc. we might be able to accept the premise that they knew what the hell they were talking about.
But to date this Government has proven little except their own arrogance and hubris in spite of its failure.
With bank bailouts, NAMA, toxic debts, rising unemployment and a real sense of insecurity and uncertainty their failures have enveloped the country in a fog of fear.
This fog, fear and confusion in addition to the BCI ruling on referendum coverage may yet be used to push through the Lisbon treaty on a second attempt.


THE GREATEST LESSON IN DISSENT 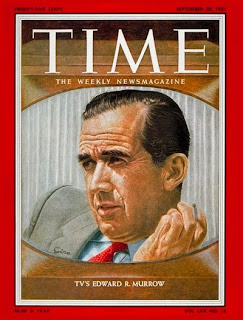 One of, if not the greatest American journalist of the modern era was Edward R Murrow. Never in a thousand years could my writing even come close to how he phrased a warning about Governments who felt they - and they alone - knew everything, dismissed accountability and marginalized dissent. In 1954, in a challenge to the McCarthyite witch hunts he said:

"We must not confuse dissent with disloyalty. We must remember always that accusation is not proof and that conviction depends upon evidence and due process of law.
We will not walk in fear, one of another. We will not be driven by fear into an age of unreason, if we dig deep in our history and our doctrine, and remember that we are not descended from fearful men -- not from men who feared to write, to speak, to associate and to defend causes that were, for the moment, unpopular"

These words are utterly appropriate to our challenges today.

We must not confuse dissent with disloyalty or allow the refusal to accept the Lisbon Treaty to be confused with our commitment to a European Union. Dissent is said to be the highest form of patriotism.

A No vote in a referendum is just that, we do not accept the proposition put before us by our elected legislators, and want a better deal.
We simply want a Union for the benefit of the people and communities, not for the politicians and corporations.

Our country was not created by people who achieved great things with courage, reason and conviction, not fear - and we must "not be driven by fear into an age of unreason based on illusory guarantees and clever editing.

When we dig into Irish history we see despite censure, public ridicule and the real danger of death we have had the incredible fortune to have had leaders who never allowed themselves to be subdued or cowed, and who supported just causes despite their unpopularity.

Our greatest leaders came from hugely diverse backgrounds. Jim Larkin overcame media vilification for Union organization.
James Connolly died for his belief in workers rights. Griffith’s commitment to self determination, O Connell’s belief in the right to vote, Parnell’s belief in fairness, Tone and Emmett’s belief in secular democracy and women’s rights fought for by people like Winifred Carney now buried in an unmarked grave in Milltown cemetary and Constance Markiewicz have all shaped our sense of nationhood.

We must remember that accusation is not proof, the cheap innuendos by Dick Roche and his ilk about funding of the No campaign mean nothing, particularly when dual standards exist in relation to the funding of the Yes groupings.

If the Government had accepted the recommendations of the Standards in public office, this issue would be more transparent and more in the interest of the democratic process but perhaps not in the interests of the Government.
DEALING WITH DISSENT
With other EU states going for parliamentary ratification of the Lisbon Treaty, without plebiscite, the attempt to force through the second Lisbon vote is an appeasement of sorts.
Again, we can learn from history. Dealing with dissent at home so as not to upset Europe was a policy followed in the 1930's by the Chamberlain Government who appeased an unaccountable system in Germany.
Chamberlain knew most of all that the staunchest critics of his European policy had to be marginalized and isolated - his supporters in the media portrayed the foremost critic as, if not totally senile, at best morally or intellectually confused - he was called Winston Churchill. History has taught us that all Chamberlains' certainties were in fact miscalculation and confusion.

That suggests that the office can not only make the man, the office can make the facts. The solemn guarantee Mr. Chamberlain held in his hand after the Munich conference were about as believeable as those Mr. Cowen has shown us.


But by unremittingly repeating these pointless garuantees (about what is not in the treaty) the illusion is created that the context of the treaty rejected by the Irish, as well as the constitution rejected by the French and Dutch, has fundamentally changed.
FIANNA FAIL FIXATION

At the launch of the Fianna Fail Yes campaign on September 2nd 2009 Mr. Cowen aptly demonstrated this arrogance by stating he did not even contemplate the rejection of the Lisbon treaty on a second attempt.
This is possibly the last chance FF have to 'win' an electorial victory before 2012. As the major party in power it is FF who, along with the greens and indies, have the power to put the referendum to the people, again, and have decided to do so, so it is primarily their referendum.
I for one do not want to see a triumphful FF telling us how they assured we won Lisbon. Its their only chance to win anything at this point, with the support of the opposition, corporations and even the church.

If Lisbon goes through they will use it as a further justification to go full term even with a 17% approval rating (i.e. family and friends) and as their are no more local or EU elections in that period, this is almost certainly the last chance people have to voice their dissent at the ballot box until 2012


CONCLUSION
We cannot allow a failing, self serving and corrupt Government, hardly worthy of the legacy of nationhood that they have inherited, or their corporate supporters to use control of the media and the fear of a deeper financial crisis that they themselves precipitated to force us to vote against our own best interests, and the interests of our fellow European citizens.
This country faces a great challenge. With the clear and present danger of financial ruin and longterm hardship, the confusion we as citizens must now address is stark and forbidding.
But note with hope in your heart we have made it through in the past.


The confusion and debate about Lisbon is really about if the Irish Government actually know what they are talking about - and their track record of the management of our country in health, education, financial regulation or economic planning does not engender any belief in their abilities to have made the correct judgement on the Lisbon treaty.
The chance to pause and reflect after democratic rejection has not been used to build the kind agreement that We the People really want, a desire that really exists
We want our leaders to give us a treaty that is accessable, that gives greater democratic accountability and transparency, and if they deliver that we will work with them to develop a better future for all.

Again, as always – thanks for reading. Even if you don’t agree with me – I hope you give some thoughts to the points made


And please let others now about these blogs
Citizen Simon - out

Posted by irishkitchengarden at 8:03 PM